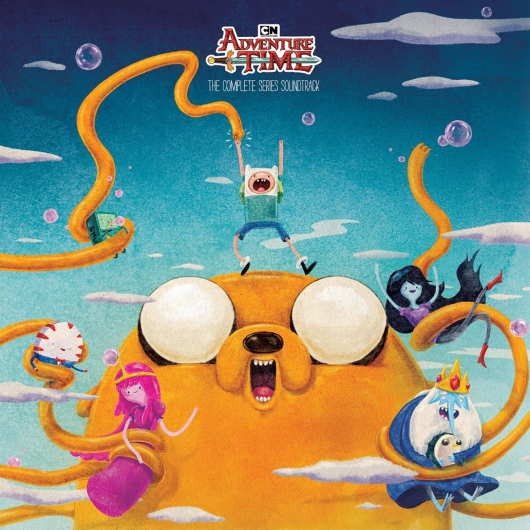 12" Compilation / Mondo / Soundtrack
Running for 8 years on Cartoon Network, The traditionally hand-animated series is the brainchild of animator, screenwriter, and CalArts alum Pendleton Ward, who also penned and performed the song’s opening theme. The theme was meant to be a temp version (You can hear ambient noises such as someone typing if you listen closely) but that original take could not be matched, so it stayed. This raw approach demonstrates the unfiltered creative aesthetic of the show, with similar bits of “hiss and grit” occurring throughout the series’ music.

Series composers James Basichis and Tim Kiefer worked closely with Ward and the series' storyboard artists on the music, giving life to song lyrics and bizarre plot dalliances alike. In an interview with Vice, Kiefer states “I think people forget that there’s continuous space between predefined genres… I just explore it.” The music of Adventure Time is utterly essential to the tone of the show, and is equally important as the visuals and dialogue in bringing the Land of Ooo to life.

The music is collected on three 12” heavyweight color vinyl LPs, one 10” record, a CD, and a cassette with 21 demo recordings. The box and inner sleeves sport artwork by illustrator JJ Harrison.
Order from TurntableLab