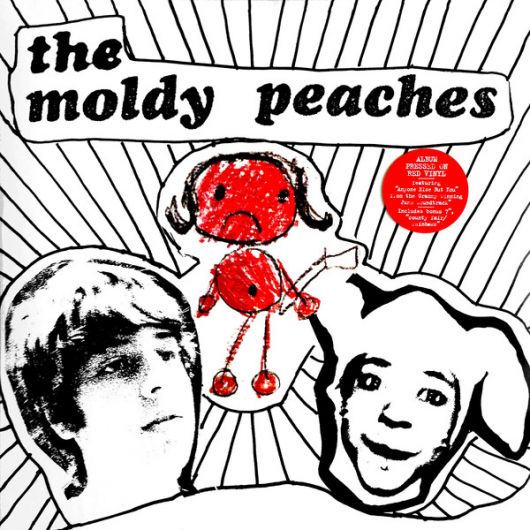 12" Album / Rough Trade / Rock, Indie rock
Debut studio album from anti-folk band The Moldy Peaches. Mostly know for their don't give an F attitude, Adam Green and Kimya Dawson's The Moldy Peaches were a fixture of New York's anit-folk scene, playing shows at the SideWalk Cafe. Their eponymous debut is made up of mostly of recordings from Port Townsend, Washington, along with a few singles that were previously released. You'll most likely be familiar with their music from movies like Juno, where Ellen Page and Michael Cera perform a rendition of "Anyone Else But You." The sound is about as lo-fi as one can get. There's plenty of humor and sloppiness, but the songwriting holds up for most of the album. One for the outsiders and misfits. Includes the songs: "Anyone Else But You," "Jorge Regula," and "Who's Got The Crack." Twenty-one tracks in all. Released by Rough Trade on red vinyl housed in a replica sleeve with a bonus 7".
Tracklist: 1. Lucky Number Nine
2. Jorge Regula
3. What Went Wrong
4. Nothing Came Out
5. Downloading Porn With Dave
6. These Burgers
7. Steak For Chicken
8. On Top
9. Greyhound Bus
1. Anyone Else But You
2. Little Bunny Foo-Foo
3. The Ballad Of Helen Keller & Rip Van Winkle
4. Who's Got The Crack
5. Lucky Charms
6. D.2. Boyfriend
7. I Forgot
8. Lazy Confessions
9. NYC's Like A Graveyard
10. Goodbye Song
+
A. Country Fair
AA. Rainbows
Order from Turntable Lab