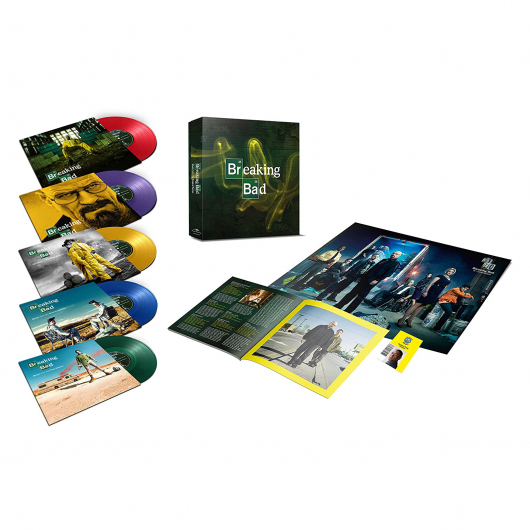 12" Compilation / Music on Vinyl / Soundtrack
Music from a variety of styles and decades can be heard throughout the 5 seasons of the series. Breaking Bad remains as relevant as ever today. In celebration of the success of the series, Music on Vinyl is releasing a box set of 5 x 10' vinyl in 5 different jackets, containing the definitive collection of Breaking Bad songs, including tracks by Badfinger, Calexico, America, Fever Ray, Apparat, Marty Robbins, Vince Guaraldi, The Peddlers and many more. Also included are iconic character dialogue snippets from Walter, Jesse, Skyler, Mike, Gus and Saul, among others.

Colours are a recurring theme in Breaking Bad. The clothing colours that characters wear represent various themes and their relationships to each other in each scene.

Exclusive and very limited edition of 400 individually numbered copies on green (side A/B), blue (side C/D), yellow (side E/F), purple (side G/H) & red (side I/J) vinyl
Order on Amazon